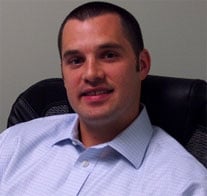 Dr. Babcock grew up in Charlotte, NC, and graduated from South Mecklenburg High School. He attended Messiah College in Mechanicsburg, PA, where he earned a B.S. in Biochemistry. (His most memorable experiences during undergrad are meeting his future wife, Laurel, and studying abroad in Kenya.) After a year of research at the NIH in Bethesda, MD, he and Laurel married, moved to NC, and Andy began medical school at UNC. He earned his M.D. in 2007, and he stayed at UNC for residency in Family Medicine, including serving as co-chief resident during his third year. In July 2010 he began seeing patients at Raleigh Family Practice and became a Diplomate of the American Board of Family Medicine. Dr. Babcock enjoys all aspects of Family Medicine, including preventive healthcare and care of acute and chronic illnesses for all ages. He has served on the Key Physicians Board since 2014. He enjoys live music (especially bluegrass), playing disc golf, and most importantly, spending time with his wife, Laurel, and two amazing sons, Hudson and Keenan!